You are here: Home1 / Blog2 / Discover the unspoilt beauty of Skopelos

Discover the unspoilt beauty of Skopelos

Despite starring in Mamma Mia! almost a decade ago, this island remains peaceful, with quiet beaches and sleepy villages

When we climbed, like pilgrims of yore, the 198 precarious and shimmering stone steps to the chapel Agios Ioannis sto Kastri, we encountered two sights that explain why this tiny church, clinging for its life to a stark rock outcrop 100m above the waves, is Trip Advisor’s no.1 place to see on the fantastic Greek island of Skopelos.

First was the jaw-dropping panoramic view of the sea and the neighbouring island of Alonissos, well worth 198 steps of anybody’s effort. The second was the sight of small groups of international modern-day pilgrims gathered near the chapel reciting, not biblical verses, but Abba lyrics.

Because this is where the climactic wedding scene takes place in Mamma Mia!, the Abba-based movie. Yet, as our climb to the chapel showed, Skopelos has much more to offer than its label as the Mamma Mia! island might suggest.

For fans, the movie locations are all there, recognisable and far from crowded (although there are no donkeys to transport you up the rock in real life, and the chapel is hardly big enough for Saint Michael to swing his sword).

For the rest of us, though, Skopelos remains the near-perfect unspoilt Greek island, which has decidedly not turned itself into a Hollywood theme park. There is almost nothing here to suggest that Meryl Streep’s feet ever walked upon Skopelos’s mountains green. Despite the local map’s (somewhat grudging?) concession that the rock-top church is now better known as “the Mamma Mia chapel”, the priceless view from Agios Ioannis sto Kari is probably much the same as when the rock was a lookout for repelling pirate invaders (the name translates as “St John on the castle”). We saw more adverts for Mamma Mia! the musical at Gatwick airport than signs of it on Skopelos.

“Unspoilt” is an overused and abused label for holiday islands, of course. Skopelos is no rustic backwater. It still looks like the Greek island of many a British holidaymaker’s imagination, where you can pootle a boat along a dramatic coastline, swim in secluded bays, wander around ancient monasteries or discover mysterious burial sites in the mountains. Sail in to the picture-book whitewashed harbour of Skopelos Town, or climb to the hilltop village of Glossa, where one evening we ate outdoors while watching local children leaping over a fire of burning flowers, in an ancient ceremony said to sort out who they will marry.

If that sounds stereotypical, Skopelos is a stereotype with a difference. It retains a character and soul of its own, one it so far refuses to sell.

One reason for the absence of mass tourism on Skopelos is the lack of direct flights. You fly to Skiathos, its neighbour in the North Sporades island group just east of the Pelion peninsula on the Greek mainland. (They sell the Mamma Mia! connection harder on Skiathos, with frequent open-air film shows, despite only a couple of scenes having been shot there.)

Our holiday began waiting for the ferry in the cafés of Skiathos port, watching the planes come in to land perilously low over the harbour — great fun, until you realise that you were on the previous one swooping in and screeching to a halt. The only real risk is said to be to tourists, blown off their feet while filming landings next to a sign that tells them not to stand there.

It is a short ferry ride of about an hour around the coast to Skopelos Town — or a shorter 20 to 30-minute hop if you disembark at the ancient port of Loutraki on the island’s west coast.

The northeast coast is noted for that rock-top chapel, and for the island’s wilder beaches, en route to the National Marine Park of Alonnissos and the Northern Sporades, where those who take a boat tour can spot seals, dolphins and all manner of fauna and flora in and under the sea.

We saw more adverts for Mamma Mia! at Gatwick than signs of it on Skopelos

We found more relaxing outings by driving down the better roads to the sunny, sheltered beaches and coves of southwestern Skopelos. The island’s slow development means that the only way to see and explore this coastline properly is still, as it has been for 5,000 years, from the sea.

So we hired a nice little 30-horsepower motor boat, with instructions about which stretches of water would be smoother that day, and off we went, with Mrs Hume at the helm, our teenage daughters relaxing and me as less-than-able seaman.

We sailed past Kastani (the Mamma Mia! beach) and the unoccupied Dasia Island (“Here Be Goats”), before pulling into the famous inlet at Blo. These protected waters have provided shelter from storms for pirates and fishermen alike. Now Blo makes an ideal swimming stop for day-trippers such as us, anchored opposite the landmark house that Michael Carroll built on the rocks in the 1960s, and wrote about in his book Gates of the Wind. His story of falling in love with the island and its people suggests that, while much has changed in the past 50 years, much remains the same.

Seen from the sea, Skopelos is green as an emerald, the pines pouring down to the coast in a wave so verdant you could almost imagine you were in the Norwegian fjords, were it not for the Greek sunshine and the souvlaki we stopped to enjoy at a tavern. After lunch we discovered that the anchorman (me) had managed his usual trick of getting the anchor wedged beneath a large rock, where we would still be if it were not for the expert assistance of a passing local school.

Parking is slightly easier on land across the island at Skopelos Town, at the harbour-side car park. Skopelos is a classic Greek island port, a bay of perfect clear sea beyond which whitewashed buildings with blue doors and tiled roofs climb the hillside. The narrow streets behind the seafront are lined with traditional craftshops and houses framed by wooden balconies — some still decorated with old-fashioned “comfort cubicles” that reportedly served as loos.

Skopelos is that sort of place — a rare gem in the Aegean Sea, but thankfully still a slightly rough diamond, not overpolished for the international market. I am told that the movie begins with the bride-to-be singing Abba’s I Have a Dream. Even if, like me, you haven’t seen the film, it is time to stop dreaming about an island like Skopelos and go.

The above content is an excerpt from the original article by Mick Hume, published in “The Times” (thetimes.co.uk). 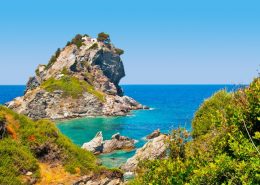 published on GreekBoston.com website
Is Skopelos the Perfect Greek Island?